Ramallah and al-Bireh Governorate is filled with fertile agricultural lands and dotted with small Palestinian villages.

Farming has been a way of life for thousands of years on these lands. Most of these villages in more recent years have had part of their lands annexed for the construction and expansion of Israeli settlements and the separation wall. Precious water resources are now being shared with settlements and Palestinian farmers struggle to get access to their lands, because of the wall and checkpoints.

Palestinian villagers and landowners have turned to education and making best use of the agricultural lands and water resources they can access to preserve their livelihoods and culture. Anera has worked with Palestinian communities in Ramallah and al-Bireh Governorate throughout the years by supporting local civic organizations and providing development programs and vital infrastructure.

Driving around the villages of Ramallah and al-Bireh Governorate, it’s hard to miss the prominent presence of Anera. There are signs and plaques of Anera projects everywhere, from reservoirs and water networks to roads and schools. Improving the Productivity of Palestinian Farms

Some of Anera’s earliest projects were agricultural and centered in this region.

Farm mechanization and agricultural loan programs were the mainstay of Anera’s agriculture work in the early years. The village cooperative of Deir Nidham, for example, was provided with tractors and other heavy farm implements that all 55 cooperative members and their families could use to work their lands. Anera also helped the Ramallah Agricultural Market Cooperative to buy a bulldozer so farmers could clear their rocky land, level the ground and deep-plough in preparation for cultivation.

The Ramallah Poultry Cooperative was founded in 1974 with modest capital and many struggles. In 1978, Anera supporters helped build a feed processing factory, which allowed the co-op to expand production. Eight years later, the factory needed to increase their capacity and Anera donors were there again to help. The cooperative thrives to this day.

Anera provided the funds in the 1990s to establish a loan program for the Ramallah Agricultural Market Cooperative. With $300,000 in capital from Anera, the program gave member farmers access to funds for making improvements to their farms. The cooperative still thrives today and serves the entire district of Ramallah, with hundreds of member farmers from all 94 Ramallah-area villages.

More recently, Anera constructed 12 miles of new agriculture roads connecting the villages of Ni’lin, Budrus, Deir Abu Mash’al, Al Midya and Beitillu to their agricultural fields and to markets where farmers could sell their produce. Villagers also had the additional benefit of better access to health and educational services. The roads have revived the villagers’ social life. Now they can enjoy family picnics and barbecues, giving them a means of escape briefly from life’s problems.

In Midya, Anera built terraces on hillsides to prevent soil erosion, preserve moisture and improve productivity of the land. These too are regular features of Anera agriculture programs. The Ramallah Poultry Cooperative was founded in 1974 with modest capital and many struggles. In 1978, Anera supporters helped build a feed processing factory, which allowed the co-op to expand production. Eight years later, the factory needed to increase their capacity and Anera donors were there again to help. The cooperative thrives to this day. Building a terrace for a park in Ramallah. Terracing in Palestine allows for more effective farming since it decreases both erosion and surface runoff.

Water scarcity is a problem throughout the arid West Bank, for urban and agricultural communities alike. Improving water access has been at the heart of Anera’s program work for four decades and many of the Ramallah villages have benefited from Anera’s interventions.

During the 1990s, Anera invested in Ein Arik, which is famous for its water springs. By rehabilitating springs, building collection ponds and introducing an efficient and modern drip-irrigation network, Anera was able to eliminate water losses and increase land production for farmers. In Midya, in 2005, Anera dug cisterns near farms for collecting rainwater to irrigate parched crops.

In 2010, Anera replaced a 26-year-old water network in Beit ‘Ur al Fauqa. The old network was installed by the villagers themselves, with no consideration for engineering standards, and left without any maintenance whatsoever. They were experiencing water losses of 45%. Anera replaced the entire network, serving the entire village’s population of 850. By 2015, Anera extended its aid to the village of Bil’in to construct a water reservoir and network that benefit 2,200 residents. By replacing the rusty and deteriorated 30-year-old water network, Anera put an end to high water losses and contamination that gave rise to waterborne illnesses. During this time, the village of Rantis with its 3,000 inhabitants received new water mains and a reservoir from Anera. The village of Deir Abu-Mash’al, home to 4,400 people, had an old water reservoir and pipelines from the 1970s that over time had heavily deteriorated. Anera replaced the village's water network with new pipes and constructed a reservoir in 2015.

More recently, Anera constructed a reservoir for the City of Ramallah that sits high on the edge of the city to store and distribute treated wastewater. Gravity helps push the water through pipeline networks to the city where it is used to irrigate gardens and put out fires. Anera’s efforts are helping Ramallah citizens access water resources and practice better urban water management. 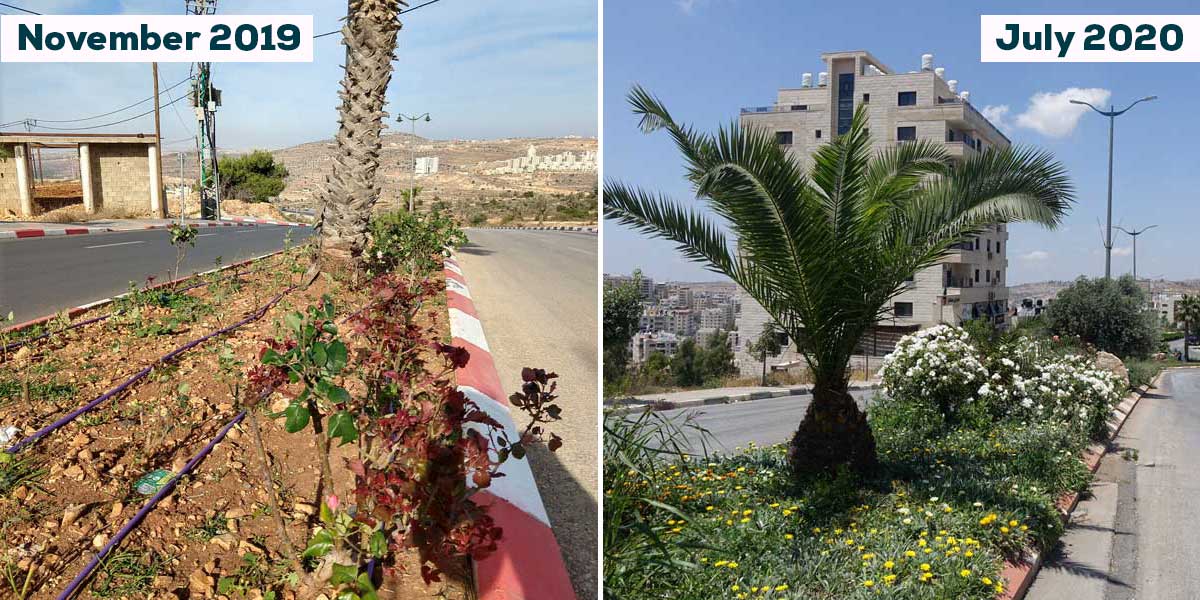 Public greenery before and after Anera installed the new reservoir for municipal water use in Ramallah. Naser Qadous, Anera's Agricultural Programs Manager, explains how the water reservoir behind him will be used for the irrigation of public parks and orchards.

Aside from their direct impact on the communities, these projects provide good jobs in places where unemployment rates are high.

In 1977, Anera donors started supporting the Arab Women’s Union of Ramallah which was one of six job-training and organizations Anera supported. Anera’s assistance included sewing and knitting machines, which women could use not only for practice but also for creating products to be sold.

In the early 1990s, the Kafr Ni’ma Women’s Society benefited from an Anera income-generation project that provided funds for embroidery and textile production and marketing activities. The fund helped provide women, some of whom were heads of households, with an income and some degree of financial independence and self-sufficiency.

In 2009, Anera built the Beit Liqia Union Club for women and youth. Located in the heart of the town, the center is still going strong, offering social and educational opportunities and activities to the village’s 10,000 residents. Courses in agricultural best practices and series in new business incubation are a regular feature of their schedule. Sports teams also have space to practice. 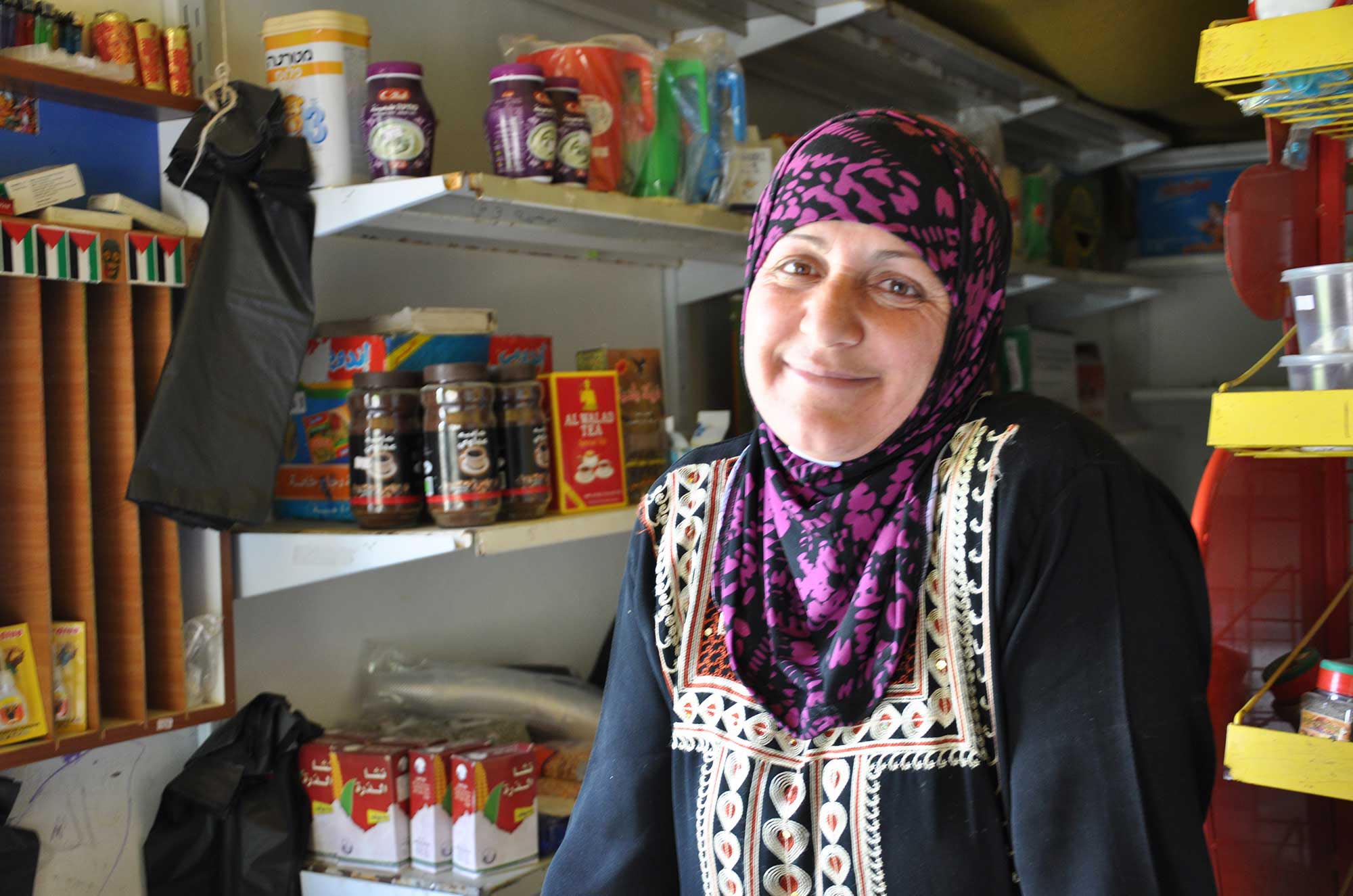 “It’s a humanitarian project that creates safe spaces for women and widens their social networks. For many of these women, it’s transformational – moving them from a state of depression and inaction to becoming decision-makers and leaders in their communities.”

Anera’s school infrastructure work is based on the premise that students everywhere deserve schools that are safe, clean and stimulating learning environments. Since 2010, Anera has improved, expanded or built schools in eight villages west of Ramallah by building new structures and renovating existing buildings.

Parents in the village of Saffa were delighted to learn that nine new classrooms were added to the primary girls’ school. And, in Beit ‘Ur al Fauqa, Anera built a new primary school, comprised of five classrooms and an administration office.

Anera also built a new preschool: two rooms added to a school in Beit Sira, designed and equipped just for the youngsters. Al Lubban school under construction in 2010.

Al-Lubban al Gharbi had only one coeducational school, which was overcrowded had very poor facilities. That’s why Anera stepped in and build a new school there in 2010. With three floors, 11 classrooms, a science and computer lab, arts room, administration room and playgrounds, the school is a great learning space for its 300 students.

Bil’in only had two schools – one for girls and one for boys. The boys’ school also served girls because of the girls’ school’s limited capacity. This meant the boys’ school was overcrowded, with up to 40 students in each classroom. In 2015, Anera renovated the girls’ school and constructed an additional floor, adding 12 more rooms to to the school as well as installing a sunshade, rehabilitating the drinking fountain and upgrading the playground.

Also in 2015, Anera added two new floors to the elementary school in Deir Qaddis. The new space includes three classrooms, a science lab, a computer lab, a library and a multipurpose hall. Anera also installed new toilets and renovated the playground as well as the existing school building.

In 2019, Anera built a new preschool, serving over 70 children each year, in the village of Ni'lin

With the help of our donors and supporters, Anera continues to invest in the next generation. Anera is committed to establishing strong educational programs and safe environments for early childhood in communities around Ramallah Governorate. Students share a laugh in the West Bank village of Qibya, which now has a public preschool. Photo by Osama Silwadi.

In 2012, three boys, aged 4-6, were playing in an unused storeroom near their homes in the village of Ras Karkar. When they didn’t come home, their parents started searching for them. Soon the entire village joined the search. After several hours the little boys were found suffocated inside an abandoned commercial refrigerator. The fridge had locked them in, its door refusing to budge. The tragedy shook the entire population of 1,500. Residents, as a result, demanded a safe public place for children to play safely.

Anera responded in 2013 with a new family park, part of a series of parks with the name of “Al-Bayyara,” meaning citrus grove in Arabic. Anera converted a vacant, rubble-filled land into a beautifully-landscaped safe haven for families to gather and children to play without fear. The park was dedicated to the three young boys: Muhammad, Omar and Mohammad, and their bereaved families.

“It was an emotional and humbling experience for us all,” explained Naser Qadous, Anera’s manager in charge of the project. More recently, in the village of Beit Anan, Anera has deepened its relationship with the Beit Anan Medical Charity Committee's local clinic to provide vital medicines like antibiotics. Organizations in Ramallah like, "Disabled without Borders," have been supported by the Anera community with medical donations of wheelchairs and other equipment for people with special physical needs. Dr. Rafat talking to Hajja Halima about directions for taking the medicine at the Anera-supported Beit Anan clinic.

Anera’s work in the villages west of Ramallah has been made possible by the support of people like you. Help us continue our vital work in Palestine and Lebanon — make a donation to Anera, today!